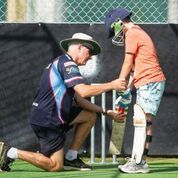 The Manly Warringah Cricket Coaching School (MWCCS) was established in 1992 by Shawn Bradstreet, David Ford and David Patterson as an avenue for young cricketers on the Northern Beaches to develop their skills and enhance their enjoyment for the game. In 2012 we celebrated 20 years of clinics. In 1993, we expanded our services to include clinics on the Central Coast and on the North Shore. We conduct vacation clinics during the Spring, Autumn, Winter and Summer school holidays, as well as providing individual and small group coaching sessions.

David played his junior cricket with Palm Beach RSL Cricket Club (since absorbed into Peninsular Cricket Club) and St Paul’s College in Manly. He progressed through the Manly-Warringah Junior Representative teams to a successful first gradecareer with Manly-Warringah. He is one of a select group to play 1st grade cricket and rugby union for Manly.

A current school teacher on the Northern Beaches, David has worked as the Metropolitan North Development Officer for Cricket NSW, and has been Head Coach at Warringah Shires and Assistant Coach at Manly-Warringah District Cricket Club.

David is a qualified Level 3 Cricket Coach under the National Cricket Accreditation Scheme.

“My kids loved the camp and the instructors were terrific. I was impressed that they were kind and inclusive and supported good behaviours in the kids. The boys both learnt a lot and are mad for cricket now.”